A Cloud of Things

Thing Virtualization means the ability of emulating the behavior of a real thing, through the use of data and actions offered by real IoT devices. For instance, a virtual person counter can be implemented processing data coming from different video sources.

VirIoT is the open-source Cloud of Things developed by Fed4IoT.  VirIoT architecture is based on Linux Containers, it can be deployed either locally using Docker, or in a Kubernetes distributed environment, supporting also edge-computing features.

VirIoT integrates emerging and promising European/Japanese IoT information standards in a single IoT virtualization platform and make the users free to chose the standard they prefer for their Virtual Silos.  oneM2M, NGSI, and NGSI-LD are already supported. Our platform establishes a reference interoperability framework such that a pool of federated IoT and fog/edge/cloud resources can be built up

Fed4IoT wants to bring the same infrastructure/application decoupling to the world of the Internet of Things, where it is not yet present. In fact, IoT application providers usually exploit their own infrastructure, or Silos, made of their own connected Things.

The Fed4IoT Cloud of Things, called VirIoT, implements this decoupling by offering IoT Silo as-a-service. VirIoT provides tenants with “Virtual Silos”: isolated and secure environments made of “Virtual Things” whose data is accessible through standard IoT Brokers offered as-a-service. IoT application designers can simply rent a Virtual Silo with the necessary Virtual Things, which emulate the behaviour of real things through the elaboration of data coming from devices, made available by infrastructure providers.

VirIoT integrates the emerging and promising European and Japanese IoT information standards into a single IoT platform and makes users free to choose the standard they prefer for their Virtual Silos.  OneM2M, NGSI and NGSI-LD standards are supported, as well as simple MQTT connectors that allow Virtual Silos to be connected to IoT services offered by upstream cloud providers such as Azure, AWS, etc. By exploiting existing IoT and cloud platforms (such as oneM2M, FIWARE, Kubernetes, etc.), VirIoT establishes a reference interoperability framework such that a pool of federated IoT and fog/edge/cloud resources can be built up.

VirIoT is cloud-native and open-source (https://github.com/fed4iot/VirIoT). Its service components are Linux Containers that can be deployed either locally using Docker, or in a Kubernetes distributed environment, also supporting edge-computing. 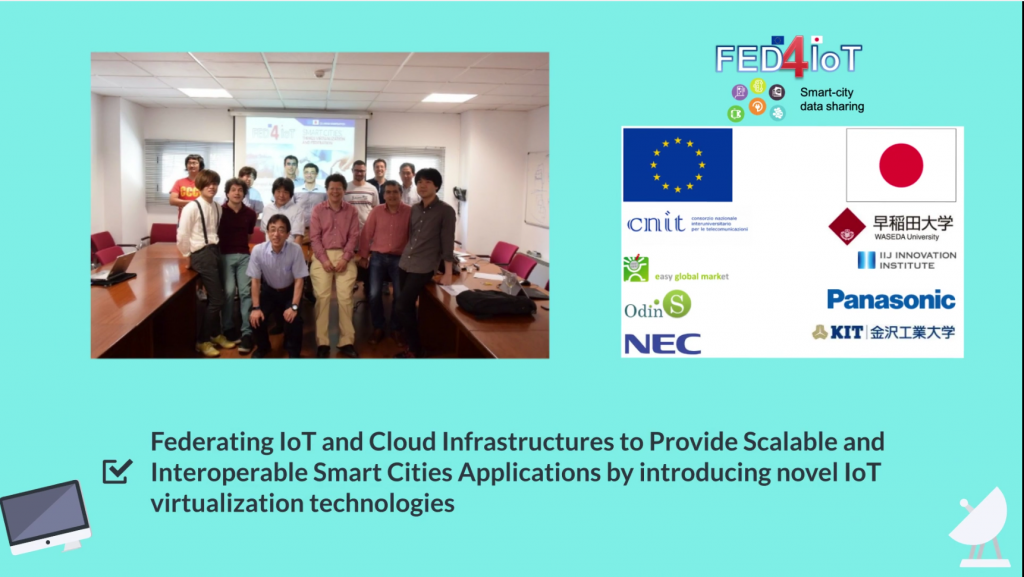